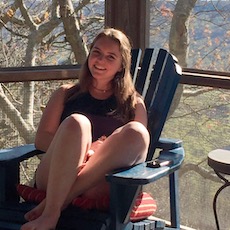 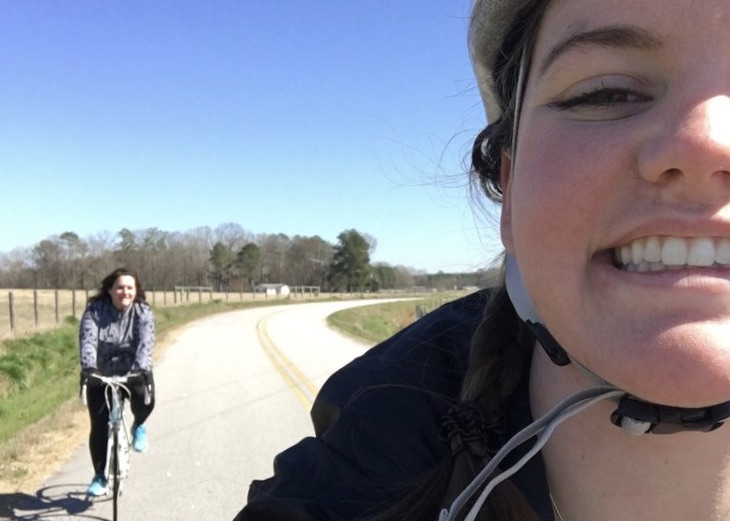 Hey! My name is Sydney Masterson and I am a senior Math major at The University of the South in Sewanee, TN. As students, we call our domain ‘the mountain’ because our campus is located on top of the Cumberland Plateau. A lot of what drew me to Sewanee is how tucked away we are and how I can be in class one minute and hiking the edge of the plateau the next, occasionally these happen simultaneously! When I applied for Pedal the Pacific I knew that being selected would inevitably mean I would one day have to bike up the mountain, yikes. I spent my first month of training sticking to our one 5-mile bike trail, attempting to master gracefully dismounting my bike at stop signs tucked along the trail and mustering up the courage to lift my hands up off the handle-bars. My biking skills quickly outgrew that little trail and I knew, it was time to face my fears and bike down into the valley; and then back up! I have realized through reflection that my training rides look a lot like my overall experience with Pedal the Pacific.

After a very long pep-talk, and my ride being delayed a day due to weather, I was finally on my way. The descent, I have come to learn, is one of the most thrilling and terrifying experiences. You’re clipped in to a piece of metal zooming down a road at 25-31 mph trying to ignore how unsafe it is and enjoy the rush while secretly praying every second that you checked your bike properly and that your brakes don’t fail you. There is absolutely no turning back. For me, this felt a lot like getting accepted to ride for Pedal, you talk yourself into it because of how much you believe in the organization then you jump into it without really any clue what to expect or what the route will really look like when you reach the bottom. It is easy to get caught up in fears when you’re racing down a road but after a while you learn to just let go and lean into the unknown. I reached the bottom in a matter of minutes and decided to take a second to dismount and process. Holy wow that was terrifying and I do not know what just happened… then I turned around… to see how far I had come already. It seemed like I had just embarked on this journey and yet here I was staring at my home that was somehow now miles away, wow. As Kaite so eloquently added in her blog, our Pedal retreat weekend in Austin felt like this. We had all just jumped head first into this process with an idea of where the finish line was but a small understanding of what would lie in between.

I took off again and spent the next hour cruising around in the valley. The biggest thing I have learned is that I need to have humility and know I am not going to be good at everything the first time I try it. Each ride I have been challenging myself to try something I am nervous about. A few examples of things I have been working on: picking my hands up to give signals, coming to a complete stop (gracefully), and balancing long enough that I can grab my water bottle and take a sip (this one was really scary). Everything I have learned took so much trust in myself as well as a lot of mental pep-talks and practicing little movements that help get me closer to my goal.

After about an hour of riding and trying to look like I know what I am doing when cars go by, I finally reached the beginning of my ascent. I stood there staring at the mountain above me, and thinking about this ride up. I expect the start in Seattle to feel similar. It is scary but exciting. You know the ride is almost over but the biggest hurdle is staring you in the face. I turned google maps on to tell me how far I had made it so I knew what was left. And then I just started and holy heck it was HARD. I purposefully chose a road up that has a long but steady ascent that is about 3-miles long. I had been advised not to get off my bike because it can be hard to get back on and you get tempted to quit but I found that incredibly challenging. I ended up taking my first break only half a mile up and I felt a little defeated that I only lasted that long. These sweet construction workers had just cheered me on as I biked by them at what felt like 1-mph and I felt defeated and embarrassed that I decided to stop where they could still see me. I texted my friend Annie who has biked this route before and said “Hora” (that’s tired text for Hola), “Holy cr*p”, “This SUCKS” before she replied, “Are you off your bike”, “Get back on”, “Don’t get off”, “You can do it”. I replied with a selfie of my disgust for this process to which she simply replied, “Get off your phone keep biking”, “It’s just you and the bike”.

So, reluctantly, I listened and mounted my steed. I actually think that the rest helped. Though it felt like I was giving in and quitting I have found that the rest was beneficial. We have multiple rest days scheduled into the Pacific ride and at first I was worried we had too much rest planned, but I have come to recognize that there’s no need to rush! We spend so much of our lives trying to go from one thing to the next. With cycling, while there are some natural deadlines, like finishing before dark, it really is just me and the bike on a mission to end sex trafficking; that’s the point. I don’t need to be fast right now, I just have to be committed. I ride to fight for the survivors, I ride to support those who work to protect those girls, I ride for this organization that I believe in, I ride to support my teammates, I ride to ride not to rush.