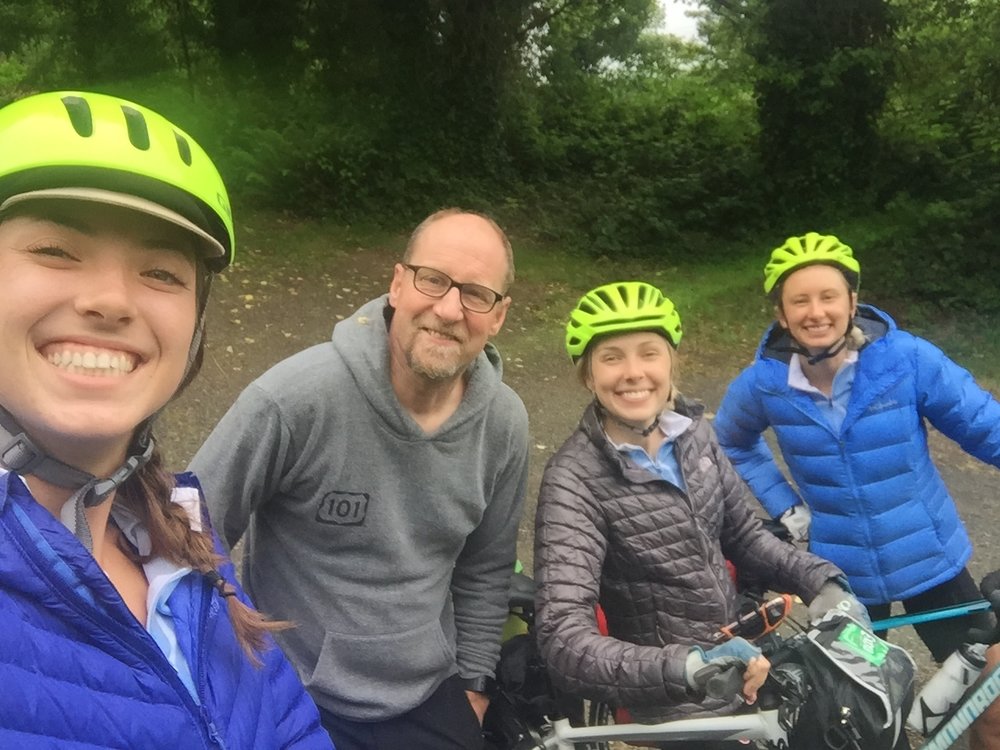 I also would like everyone to know that Darin said, (direct quote) "I'd have to say y'all are the coolest touring cyclists that have ever come through our bike shop."

We woke up to find that Darin had bought us a dozen eggs and muffins and let us help ourselves to anything in his fridge. We've been stuck eating tasteless oatmeal for the last few days so this was a FEAST. We sat on his couch, ate, talked, packed up, took a selfie and went on our way!

I also would like everyone to know that Darin said, (direct quote) "I'd have to say y'all are the coolest touring cyclists that have ever come through our bike shop."

Compliment received, Darin. Also, if you're reading this, this is Grace and since the day I bought my bike back in March I have been in a constant TURMOIL about what my bike's name would be. Ask Savannah, she's been with me through the whole bike-naming process. But today, I decided to name my bike Darin!! So THANK YOU AGAIN for being so generous and welcoming and just a genuinely kind soul. I think you should brag about this one to everyone you know... I doubt they have a bike named after them. Let alone, a bike Is owned by one of the three "coolest touring cyclists that have ever come through Newport, Oregon." Take that one to the grave, Darin. You deserve it.

At mile 0.1 Savannah hurt herself. Yes, again. Yes mom, she is okay. But I think she is going to single handedly use up the entire contents of our first aid kit.

We biked a ways to Seal Rock and decided to get off and explore for a bit. We climbed through Narnia to get to the beach but it was so worth it! We saw a few far off seals, lots of oysters, barnacles, star fish and seaweed! Back up again through Narnia to get back to our bikes and....yep, you guessed it. Savannah slipped in the mud and fell. Again. Good thing she was already carrying around the first aid kit because she had just finished doctoring herself up after that first fall.

I would like to take this time to admit that one of the biggest genres in my sense of humor is watching people fall. If you've ever taken a tumble in front of me, odds are I remember and replay it in my mind often (Clare: freshman year in the river. Mom: being thrown off your Segway in Paris, Avery: eating it on the surf stimulator in San Antonio). So, I often have an intense inner battle with myself on if I am allowed to laugh at Savannah's misfortune or if I need to take care of her.

Every now and again I'll be riding, zoned out and every single one of Savannah's falls will flash in my memory one after another and I'll have a good laugh for about 10 minutes. Sorry Sav, I love ya. And don't worry Jim and Karen, I promise I'm taking care of your daughter.

Tangent over. Then, we got back on our bikes and cranked out the last stretch and got to our campsite pretty early, which was awesome because we had time to relax. The first half of the day was really foggy and cloudy, which is pretty much how every day has been this last week but the sun came out by the time we got to the state park. Sara and I went and laid out on a sunny, grassy hill and read and slept. It was magical.

At our hiker/biker campsite we met a couple of guys who were taking a break off the Pacific Crest Trail because of the snow and another family family from Canada who were all biking together down part of the Oregon Coast.

Before coming on this trip I felt like a TOTAL newb/amateur/poser in the world of cyclists. We set out on this journey along the coast and didn't even own a bike until March. When we told real cyclists our plan to go 40-60 miles a day they'd smile and say "oh. That's SO doable" which was in a way good to hear but also sometimes I'd assume came with a hint of "you're a weeny for ONLY going 50 miles a day." But one of the coolest things about this trip has been seeing groups of people all going at their own pace. Some have really nice gear and bikes and go crazy distances each day and others are using bikes that they built in their garage and the only shoes they have are dirty old Vans. It doesn't matter what pace you're going - we're all out here doing the dang thing and that's something to celebrate!

The last few miles of our day and into the campsite, we had no cell service so we hung out, read, made dinner and went to bed. A few hours later I was woken up by Sara saying "Grace. Grace wake up" and a park ranger walking through the tent sites yelling "Grace Pfeiffer? Is there a Grace Pfeiffer here?" I had been asleep for a while and was so confused what was happening. I didn't even unzip my tent or sit up I just said "yes?" She said "I've got your dad on the phone and he said he hasn't heard from you and is fixing to get on a plane and come down here himself if I don't tell him you're alive. He said yo-" (My dad and I have a code word that I text him to let him know I'm okay. I can't disclose that code on the blog for obvious reasons, but I said something along the lines of....) "tell him I ate a banana today" "....you want me to tell him you ate a banana today...?" "Yes." I said as I roll over, annoyed, and went back to sleep.

Shoutout to you, daddio. Thanks for checking in.

P.S. If anyone has some good camping breakfast food ideas up their sleeve...hit us up