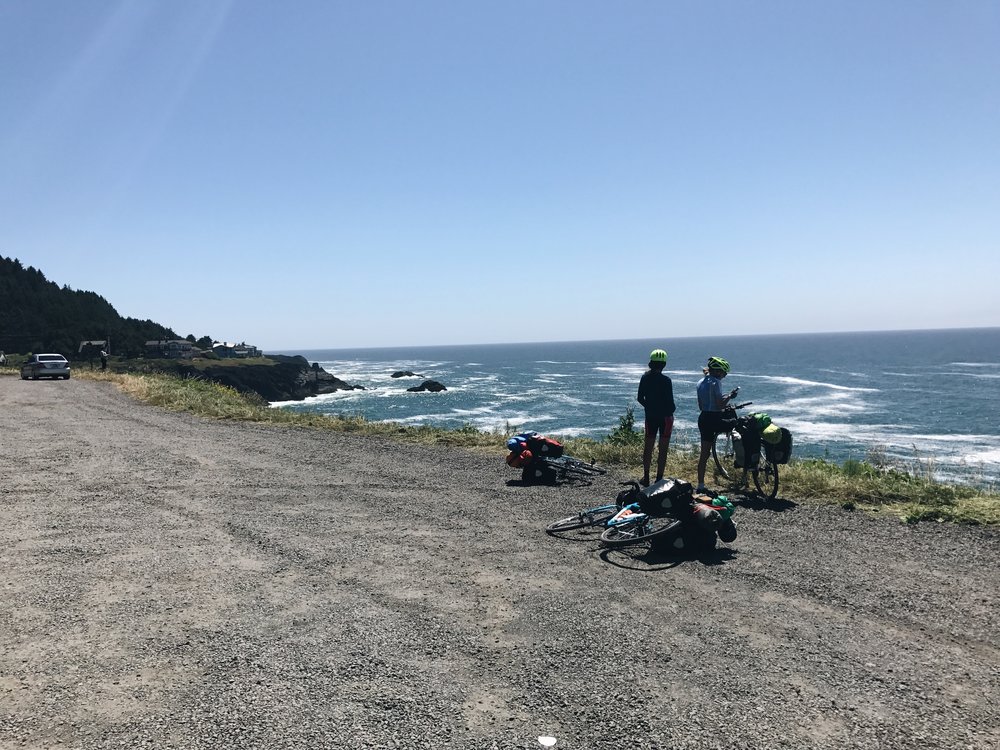 Before we headed out on day 1 of Pedal the Pacific, we had raised a little over $42,000. Holy cow. Every time I read, write or even speak that number I am both humbled and blown away at the same time. HOW the heck did that happen? How the heck did we double our goal before we even began? That's something to celebrate!

Now we can sit back, relax (or at least relax as much as you can when you're riding 1700 miles down the coast) and enjoy the ride, right? I recently realized that my mindset the last couple of weeks has been something along the lines of "we've accomplished what we came to accomplish and anything above that is just bonus."

But the thing is, we aren't done. And as the hills get steeper, as my body grows more tired and the days begin to feel more monotonous, I have to remind myself WHY we are doing this. It's not just for an adventurous trip through beautiful scenery with two good friends. It's not just to raise $49,000 and stop there. It's to build The Refuge. It's to be a part of the story and the backbone that is building walls that will soon house young girls who all carry with them stories of brokenness and exploitation.

My last semester in college and my time interning at The Refuge, I really got to learn firsthand why facilities like this are so crucial in the fight against the injustice of sex trafficking.

A recent study released by UT grad students reports that there are 79,000 minors and young adults being sex trafficked in Texas alone right now. And to put this into an even more shocking perspective, there are only 350 beds in the entire country that are available to house these survivors and facilitate long term healing.

As of now, when police recover these young survivors from their enslavement, they have no where to go. Police often are faced with having to put these victims in prison for the sole purpose of getting them off the streets and away from their pimps. No one wants them there; these girls are far from criminals, but there is simply no other option. These girls need protection and care that they clearly will not receive in juvenile detention.

Another option is to enter these girls back into the foster care system. Unfortunately, this is where much of the problem began in the first place. 86% of minors who have been sex trafficked have come from the child welfare system. This is because pimps often prey on children who are more likely to come from a background of abuse and less likely to have family that will come looking for them when they are missing. The sad reality is that many of these kids run away from their homes often, and after a handful of times no one is out there looking for them anymore.

I hope by reading this you can sense that there is an urgency here. Places need to be built. Places exactly like The Refuge. These young girls are out there right now. Each and every individual human in that entire 79,000 has a story - one seeping with hurt, distrust and betrayal but one that can be turned into a story of redemption when the walls come up and the doors are open.

Once completed, The Refuge will have 48 beds for young survivors of sex trafficking to heal from the unspeakable, making it the largest facility of its kind in the nation.

It's estimated that the entire construction project to build the Austin facility will cost $6.5 million and an additional $1.5 million to operate each year. As a whole we are about halfway there. So, even though our personal Pedal the Pacific goal has been met and that is something to celebrate, our work is not done. We initially thought $20,000 between the three of us was dreaming big. However, this is now so much bigger than the three of us - which is why our new goal for the Refuge is $75,000.

Let's get these walls up and this place built so that these girls can make their story one of healing, redemption and purpose. We can't do it without you!