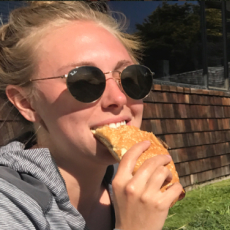 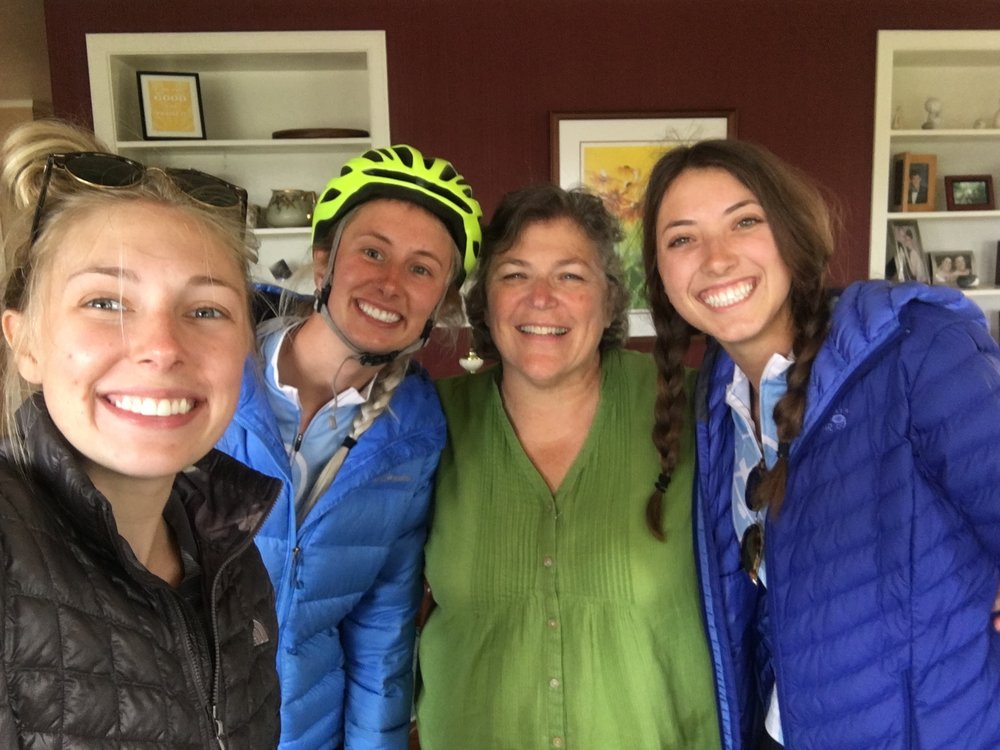 Hang with me, because it's a long one. We've got a lot to catch you up on.

Early morning wake up with a high elevation climb up to Seal Rock. Although we didn't pay 20 bucks each to see some seals, we finally got cell service to check in with our parents. After stopping for lunch and FaceTimeing the family Savannah will be Au-pairing for in MILAN (so freaking cool), we starting riding toward the campground. Mile after mile we kept seeing stations for ATV rentals and rolling hills of beautiful sand dunes, so we decided to stop and scale a steep, 2-story dune to check it out.

I never expected to see miles of this in the middle of Oregon, but man the dunes were beautiful. Naturally, we had to film another amature work of Instagram-story-art in which Savannah injured herself by swinging from a tree, yet again.

We thought that maintaing our balance through gusts of wind as we walked our bikes over the Coos Bay Bridge would be the main event of July 3rd. But, alas, an unsuspecting trial lie waiting to devour us-- Seven Devils Road. And it didn't help that the three of us slammed some Taco Bell (this is no understatement as I consumed 2 cheesy Gordita crunches, 3 crunchy tacos and a side of chips and cheese) before coming face-to-face with the seven individual elevation beasts.

As you can see, we lived to tell the tale.

Tonight we stayed with a Warm Showers host, Brian! Although he was in the middle of remodeling his house, he was generous to let us crash in the living room and even took us to see his sailboat. Apparently the previous owner was sailing to New Zealand from Hawaii and got stuck in a typhoon or something, so by the time he got to Oregon, he was so over it that he gave the boat to Brian for FREE.

This day will also go down in history, not only as Independence Day, but as the day we met John Huttl. To be authentic here, we just weren't feeling the whole bike thing today. Seven Devils kinda took it out of us, so by the time we pulled up to Port Orford RV park we were all ready to skip the celebrating and take a fat nap *no offense, America. THEN, WE RAN INTO JOHN. He helped us get registered while everyone went to the local parade and informed us that he was treating us to a fancy dinner and a tour of the town so we had to be ready by 5:00! When he came to pick us up, John greeted us with Port Orford BEANIES from a local restaurant. What an angel. We had an amazing dinner and talked about Pedal the Pacific, John's life story, the beautiful house he is building, our upcoming journey into the Redwoods and we even found out that we used to live in the same city! We finished out the night with fireworks at Battle Rock and fried Oreos. Happy friggin, birthday 'Merica. We love you.

We woke up to some insane fog and rain. And Saint John struck again. Turns out he works in Gold Beach, so he offered to drive us through the bad weather to our campground, treated us to breakfast and invited us to speak at the Curry County Commisioner's meeting about Pedal the Pacific! We told our story and shared the importance of The Refuge to a room full of southern Oregon's most upstanding citizens and even got covered in their newspaper for it! The rest of the day consisted of laundry, showering and reading at the RV Park before the big ride to CALIFORNIA tomorrow.

This whole trip we had been talking about how crazy it was that we hadn't experienced any flat tires through Washington or Oregon, so pride came before the fall about 30 minutes before our epic Facebook Live that was going to be shared by a ton of news stations in Texas. The big plans of recording the video right as we crossed into California fell through, but it all worked out and we had THOUSANDS of viewers from all across the country. If you guys tuned in/liked/commented/shared, thank you so much. And if you didn't, you're the worst. Just kidding. You can still see it on our Facebook page. It was truly overwhelming seeing the support we have from friends, family, people we've met on the road, but especially when complete strangers are invested in the mission of The Refuge. We all got pretty emotional watching the video again as we sat 6 miles from the California border. And then I got extra emotional after a clipped-in fall at the stop sign down the road.

Just when we thought the day couldn't possibly get any better, we pulled into the RV Park to stay the night with Paul and Kerry Bell. Back story on these two: when Savannah and I were 15 years old, we got our first jobs at Lasting Bridal Couture of Addison. Paul and Kerry owned the shop and the two of us pip squeaks basically lugged huge gowns in and out of dressing rooms and cleaned a lot until we were old enough to take appointments. I even worked there full time for a semester after I graduated early from high school. So what the heck are the odds that they arrived in Crescent City THE DAY BEFORE we got there! They had printed out the lyrics to California Dreamin' by The Mamas and Papas for all of us to learn and sing as a group along and cooked some HOMEMADE manicotti and chocolate chip cookies. Spending time with them was like spending time with family cause they basically watched Savannah and I grow up for the past 8 years and Grace was quickly embraced into the Bridal Couture family. P & K, if you guys are reading this, thank you for not only supporting this journey but also helping Savannah and I grow into who we are today. You guys are one of a kind.

We started out our day with a 1,200 ft hill filled with traffic stops and angry California drivers, but finished it eating Subway sandwiches on the beach. I'll be honest, we walked a lot of this stretch but mostly because my right knee pretty much quit functioning *I'll address this later on in this post.

Another crazy "what are the odds" moment was that we happened to be staying at the same campground as Texas 4,000. Savannah and Grace have some friends in this group of UT students that cycle from Austin to Anchorage, Alaska every year to raise money for cancer research. These guys are no joke and can be best defined as  "hilariously athletic" especially after hearing about their 111 mile rides up 14,000 feet of elevation. They gave us pizza rolls, chicken nuggets and ice cream as we laughed for hours about our stories and cycling jokes that we though no one else would find funny until we met other cyclists our age. They also gave us their contact for the couple they stayed with in Eureka that would end up being the biggest blessing on our trip. Savannah, Grace and I always joke that we're now unrelatable to the general public with our bike humor, but we felt right at home with Texas 4,000. You guys are absolutely incredible and inspiring.

In the morning we woke up and my knee wasn't much better, but I decided I was being a weenie and to bike through it. It wasn't until about 16 miles into the ride I reached my breaking point. Something was really wrong, but I had no idea what was causing the pain and was super frustrated. A sweet family traveling to a reunion in their motor home picked us up off the side of the road and drove us to Eureka's bike shop to see if my issue had something to do with bike fit.

This is where things get interesting. As soon as we pulled into town, Savannah realizes that she left her prescription sunglasses on the side of the road about 30 miles back when we were trying to hitch a ride. We also found out that a taxi ride to pick them up would've costed about $150 one-way, so we brainstormed and ended up renting a Uhaul van and taking a little road trip. Sure enough, those bad boys were chillin' exactly where we left them a few hours back, so we drove back and celebrated with Mexican food.

We reached out to Steve and Loretta (our Texas 4,000 contact) for a place to stay after the sunglasses excursion and man, am I glad that we imposed our smelly selves on the poor unsuspecting couple. They are hands down two of the most hospitable and compassionate people, with a life motto to "love people and cook them good food." The best part was their chunky yellow lab, Darryl. We loved him so much that I ended up naming my bike Darryl. Steve and Loretta, I wanted to name my bike after you guys but I couldn't fathom how I would pick between the two of you, so Darryl it is.

We started our rest day by going to church with Steve and Loretta before running some errands and getting my knee checked out at the clinic. This is where I got the news that "either you've already torn your MCL or you're a day of biking away from doing so." The doctor also told me that I shouldn't walk for the next two weeks and biking was a no-no for at least 6 weeks. And unfortunately she didn't change her mind after I told her I had about 3 weeks left in the tour. With no MRI nothing was completely confirmed, but I was bummed nonetheless. When we got back to the house, Steve and Loretta were ready with ice, heating packs, ice cream and a STEAK DINNER. I really don't know what that day would've looked like without Steve and Loretta. They are so unconditionally supportive and caring. Thank you both for taking us in during such an interesting two days and rolling with all of our bumps in the road *pun intended. Y'all are Pedal the Pacific family to us.

Steve and Loretta also helped us brainstorm what the next 10 days would look like until we made it to San Francisco and drove us to pick up our second Uhaul in 24 hours. For those of you wondering why we chose a Uhaul instead of a rental car, it was significantly cheaper with tons more room for Darryl (The bike. We did not commandeer the pup). I also named our new support vehicle the Belmerswagon. I'm getting pretty attached to it honestly. My dad was also happy to hear that if all else fails I'll make a good living driving large vehicles. The game plan now is to rest as I drive the support vehicle in hopes that I'll be healed up enough to finish the tour from San Fran to San Diego. I understand the balance of listening to my body but everything in me wants to finish what we started on two wheels instead of four, so your thoughts and prayers would mean the world and of course we will keep you guys updated on the process! Choosing to believe there is purpose in whatever happens.